Neither professor’s book nor Supreme Court give last word on climate. It takes an election. (Opinion)

My latest opinion column appears on Cambridge Day under the title: “Neither professor’s book nor Supreme Court give last word on climate. It takes an election.”

My column is a recap of a recent talk by Harvard Law Professor Richard J. Lazarus on his newly published book The Rule of Five. 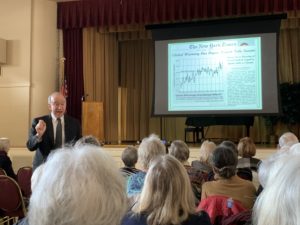 This April will mark 13 years since the landmark Supreme Court decision (Massachusetts v. EPA) that made greenhouse gases subject to regulation under the Clean Air Act. But if the current President is reelected, the environmental regulations that followed the ruling may be scrapped.

The story of the Court’s 5-4 decision, the culmination of seven years of litigation by a broad coalition of environmental groups and attorneys general representing a dozen states, is the subject of a new book, The Rule of Five, by Harvard Law School Professor Richard J. Lazarus. The author, a leading scholar of environmental law who has himself presented oral arguments in 14 Supreme Court cases, spoke about his new book at the Thursday Morning Talk for Mount Auburn Hospital on February 20th. He said his goal in writing the book was to bring to life the human drama and personalities that shaped this seminal case, which he said environmental advocates describe as “their Brown v. Board of Education.”

The book highlights the years of coalition-building and legal strategizing it took to bring the case before the highest court in the land. Although a graph showing the connection between greenhouse gases and global warming had appeared on the front page of the New York Times as far back as June 1988, it was not until the 2007 decision in Massachusetts v. EPA that carbon dioxide became subject to federal regulation as an air pollutant that endangered public health. Today, as the effects of a warming climate are manifestly undeniable, losing two decades in the fight to combat climate change seems unconscionable.

The fight to save our planet should transcend partisan politics, and yet both Democrat and Republican administrations have squandered precious time. Lazarus said Bill Clinton chose Al Gore, one of the original climate change Cassandras, as his running mate to neutralize criticism over his abysmal environmental record as governor of Arkansas. But Clinton’s choice proved to be mere window-dressing, as his administration ducked the fight over regulating industry. Then, in 2000, when Gore ran against George W. Bush, it was Bush who pledged to regulate carbon emissions from power plants, while Gore — author of Earth in the Balance (1992) — shied away from the controversy around what should have been his issue. The author of An Inconvenient Truth (2006) appears to have been inconveniently muzzled during his two terms as vice president and muted as a presidential candidate.

Lazarus recounted how President Bush appointed a Cabinet chock full of “environmental hawks” most notably former New Jersey Gov. Christine Todd Whitman as the highest-profile EPA head ever. Bush’s Treasury Secretary Paul O’Neill considered climate change akin to the threat of nuclear war, and both Secretary of State Colin Powell and National Security Advisor Condoleeza Rice agreed that global warming posed a significant and imminent threat to national security. Finally, at the dawn of a new century, the stars seemed aligned for meaningful action to combat climate change. And then Vice President Dick Cheney trumped it all with a 2001 letter “from” Bush during the Kyoto Protocols, denying that carbon dioxide was a pollutant and saying he had no authority to regulate it.

The Bush-Cheney betrayal triggered years of litigation to reverse this disastrous course, a tortuous path that Lazarus researched painstakingly. While the outcome of the Court’s 2007 decision is, of course, known, The Rule of Five creates narrative tension by focusing on the behind-the-scenes power struggle among the people who built the winning case. A key figure was Jim Milkey, an assistant attorney general from Massachusetts who made the oral argument, winning in his first appearance before the Supreme Court. Passed over for the honor of arguing the case before the Court was Lisa Heinzerling, the brilliant young Georgetown University law professor who had written the petition; the fight over who would present the case was bitter, and according to Lazarus Heinzerling and Milkey stopped speaking as a result. (Heinzerling testified during last year’s Senate hearings on the appointment of Justice Kavanaugh, calling out his record of rolling back environmental laws. Milkey became an associate justice on the Massachusetts Court of Appeals in 2009 and remains a stalwart defender of environmental protections.)

In the end Milkey’s argument was persuasive, but locking down five votes wasn’t a sure thing until several months of circulating drafts in judicial conference. Justice John Paul Stevens wrote the majority opinion, finally securing Justice Anthony Kennedy’s swing vote with the eighth draft of his brief. Justices Ruth Bader Ginsburg, David Souter and Stephen Breyer rounded out the narrow majority. The rule of five prevailed.

Massachusetts v. EPA paved the way for the carbon reduction regulations passed under the Barack Obama administration, now imperiled under President Donald Trump. With time running short to control carbon emissions and stave off the most catastrophic effects of global warming, two of the most compelling reasons not to reelect Donald Trump are his avowed commitment to gutting environmental protection laws — even dismantling some regulations that industry supports — and his threat to withdraw from the 2015 Paris Climate Agreement. A second term could very well be a death sentence for our planet.

To Lazarus, Trump’s pledge to rollback regulations passed since Mass vs EPA highlights the broader democratic lesson that “a Supreme Court decision can jumpstart legislation, but it is never the last word. It takes the votes of people in elections. You can’t assume history; you have to fight for it.”