This morning I gave the opening address at the 2016 Climate Congress:

Good morning and welcome to the closing plenary of Cambridge’s second Climate Congress. On behalf of Mayor Simmons and the City Council I would like to thank Green Cambridge for organizing the Congress and for bringing us all together over the past 6 weeks. Quinton Zondervan and John Pitkin along with John Hixson and their Northeastern intern Brian Johnson all have done a tremendous job organizing these sessions. I’d also like to give shout-outs to my invaluable legislative aide Nora Bent, who ran point for the opening and closing sessions at City Hall and to Chris in the IT Dept. for coming on a Saturday to run the audio-video.

A top priority of this Congress was to bring together a diverse group of delegates that would represent the diversity of our city. Looking at the faces in this room and at the names on the list of delegates I see that we have succeeded.

Diversity was the organizing principle for the six discussion groups:

The findings and the draft statement reflect our diverse perspectives, capacities and challenges at the individual level.

We will need to leverage our diversity of talents to take meaningful action to meet a diversity of needs. I’m confident that everyone here today will have a multiplier effect in our local community, and in our wider networks.

Mounting a response to climate change has always been hard work. I don’t need to tell you all that our work will be even harder after what happened on Tuesday.

We have an avowed climate denier preparing to move into the Oval Office.

Our president-elect has threatened to shut down the EPA, rescind the Paris Agreement, and stop funding UN programs to fight global warming.

The new Tweeter-in-Chief thinks he can make America great again by reviving the coal industry, and allowing oil and gas drilling on federal land.

He could put Keystone XL back on track, green-light the Dakota Access Pipeline and undo much of Obama’s environmental legacy.

I’ve even heard Sarah Palin has expressed interest in a cabinet post — maybe Secretary of the Interior?! I don’t know whether to laugh or cry.

Hindsight is always 20-20 but we will pay dearly for the decisions of the Clinton campaign and the media not to make the environment and climate change a focal point of this election. We let them off the hook. We cannot let that happen again in 2020.

Four years from now we must elect a president who makes addressing climate change her (or his) #1 priority. Our country can’t be great if the planet it sits on is getting sicker by the minute. Our organizing and advocacy need to redouble.

And in the meantime, now more than ever, cities and states will need to lead on environmental issues — and we will need a large vocal army of climate citizens like you to push us to take bolder action and to help us build consensus when special interests push back on our demands.

I was at MIT the day after the election. The students had wrapped those giant columns inside the rotunda of the main building on Mass Ave (Building 7) with white butcher paper. Some columns were labeled “Hopes” and others “Fears.” They left them up until Thursday night and are going to transcribe and archive what the students wrote. Yesterday they put new paper around the pillars that asks, “What should we do?”

You’ve expressed hopes and fears in your discussions over the past 6 weeks. Now it’s time for each of us to decide what we should do, as individuals and together.

I’ve read the draft statement and I think it sends a strong signal. I look forward to hearing your discussion and to bearing witness when the final version is signed at the closing of this plenary. The statement suggests creating a symbol of response. I think we need an inspirational theme song to put us in the right frame of mind. One that inspires me is “Anthem” by the great singer-songwriter Leonard Cohen, who died a couple of days ago. It was on his 1992 album entitled “The Future,” which he said was inspired by earthquakes, floods and riots in that era. Cohen was always ahead of the curve. Some may know these words in the song’s refrain —

Ring the bells that still can ring
Forget your perfect offering
There is a crack in everything
That’s how the light gets in.

Cohen once explained the refrain as meaning, “It’s no excuse… the dismal situation.. and the future is no excuse for an abdication of your own personal responsibilities.”

We can’t use the election as an excuse, or say that we don’t have enough power as individuals. We can and we must all help conserve, adapt and restore. Thank you for committing to be delegates and signatories of this new climate contract.

Here is the Statement of Response that the Climate Congress delegates and attendees signed at the end of the morning:

We can act now to protect ourselves, future generations, and life on earth from the conditions of a changing climate. We believe it is our responsibility to act now to

We do this as free citizens of a universal community of mutual responsibility, committed to caring for one another. We pledge to act on and communicate this commitment and to engage members of our communities in Cambridge and beyond. Our response is a necessary part of the national and global response, freely offered with a commitment to justice for all in a common struggle. 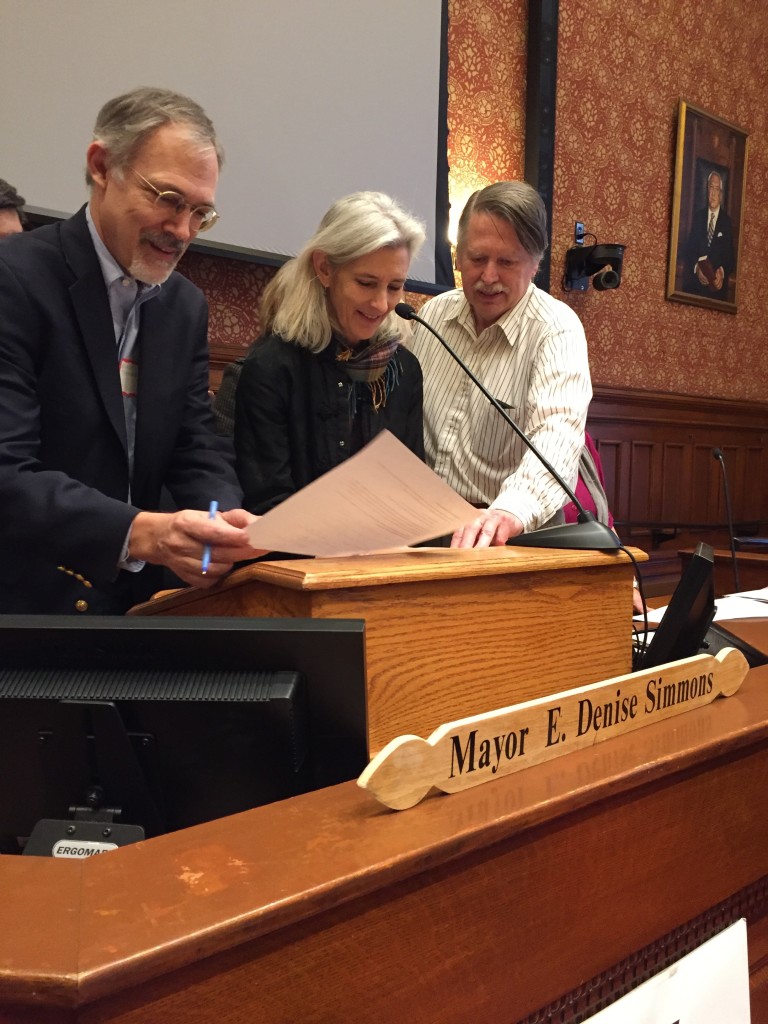 Signing the Statement of Response