The Power of Small Changes

This was published in Cambidge Day on 1/27/20 as “Even in climate crisis, changing habits is hard. Powers shows we can be weaned from bottles.”

Recently I went to hear a talk by Samantha Power, President Obama’s UN Ambassador and Human Rights Advisor, and it left me thinking, not about foreign policy, genocide and war crimes, but about the ubiquity of plastic water bottles. And about how big changes can — must— begin with small actions.

Now back on the faculty at Harvard’s Kennedy School, Power was a guest of Cambridge’s venerable Thursday Morning Talks, making a local stop to promote her 2019 memoir, The Education of an Idealist. Her talk was unscripted and full of charming personal anecdotes, delivered informally as if she’d stopped in for a cup of tea (or bouillon, in the custom of the Thursday Talks) with 350 old friends. Arriving a few minutes late, the former ambassador quickly disarmed us with her humility and humor; apologizing for her tardiness, she explained that she’d had trouble parking because street construction had required a detour around the block. She noted wryly that when she was a Cabinet member her driver never had a problem parking even in Manhattan. Now, she drives herself and dresses casually, her long reddish hair loosely tied back in an untamed pony tail that would have made my mother — and probably many of the older women in the room — reach for a hairbrush.

Power’s presence had drawn what was said to be the second largest attendance in the 84-year history of the weekly talks. Extra chairs were still being brought in as Powers was introduced. Many of us had come hoping to hear Power’s take on Putin’s aggression in the Ukraine and its connections to Trump’s impeachment trial, which was beginning that very morning, or her views on the escalating tensions in Iran and Hong Kong. Instead, we heard a long story about bringing a plastic water bottle to the Oval Office. And, for me, the story resonated strongly as a metaphor for the scale of the challenge the world community faces climate change.

It was early in Obama’s first term, and Power was walking to the Oval Office to meet with the President and other senior officials to prep for a meeting that day with UN Secretary Ban Ki-moon. Realizing belatedly that she didn’t know exactly how to find the Oval Office, and too embarrassed to ask anyone else in the hallway, she hurried back to her desk and pulled up a West Wing floor plan on Google. Returning with a map, she still lost her way and arrived late, the pre-meeting already in progress. The early months of pregnancy had made her prone to fainting, so she had gotten into the habit of carrying the same plastic water bottle with her everywhere like an infant’s security blanket. Its Poland Spring label faded and peeling, the bottle looked battered enough to imagine it might have traveled with her when she was a cub journalist reporting from war-torn Bosnia. Without thinking, she placed this grody plastic bottle on the table between her and the President, and from behind a White House detail officer’s arm immediately swooped in to whisk it away. “I never saw that bottle again,” she laughed.

If only it were that easy to make every plastic bottle vanish! Globally over a million plastic bottles are purchased every minute of every day, and it’s estimated that this year over half a trillion plastic bottles will be sold. Most plastic ends up in the ocean, which by 2050 could contain more plastic by weight than fish, or in landfill where 12 billion metric tons of plastic is projected to be buried by mid-century. (Forbes magazine) Clearly, our global plastic crisis has reached a scale that makes it nearly impossible to imagine that our individual actions can have a meaningful impact.

Eminently relatable, Powers gets how powerless many of us feel these days. Continuing in a confessional mode, she described her anxiety even presuming to write a memoir when she admittedly “hadn’t brokered world peace.” Self-effacing to a fault and yet obviously possessing an unusual combination of emotional and scholarly intelligence, a high tolerance for risk, and a genuine passion for making a difference, it’s not hard to see how she and Obama, then newly elected to the Senate, forged an instant rapport during an initial dinner meeting that ran on for hours as the two rising stars found multiple areas of mutual interest. At the end of this extended meeting of the minds, she summoned the courage to say she wanted to work for him, and wound up leaving the security of a post at the Kennedy School to intern in his Senate office. The meteoric career arc she humbly attributes to “a lot lucky breaks along the way” resulted in no small part by dint of the force of her own talent, intuition and gumption. She and Obama share a rare knack for making their successes seem almost effortless, and on the likability scale they both score off the charts. But Power isn’t running for office; she’s busy running after her two young children, and teaching and writing, and one gets the feeling she saw enough of how the sausage was made in Washington power circles to curb her appetite for being at the center of it.

Her memoir is intended to inspire the next generation of young idealists to follow her lead in tackling big intractable problems by helping them overcome what she described as “the paralyzing sense of being small” and showing that careers are constructed one personal choice at a time, often without following any roadmap. For those who doubt themselves the way she has, she affirmed that individual choices and actions do matter. She said the approach to change-making she recommends — “shrinking the change” — was inspired by another book, Switch by Chip and Dan Heath. (And need I note how refreshing it is to hear a famous author digress from talking about her own book talk to recommend someone else’s book?) To shrink the change you need to slice off a small sliver of a big problem and define actions individuals can take that make it seem possible to solve. Baby steps, if you will.

So back to the plastic water bottle: After her talk ended Power stayed to autograph copies of her memoir and sitting on the table in front of her was… a plastic water bottle labeled in Sharpie with her name. I couldn’t resist remarking on its presence and the challenge of eliminating single-use plastics from our consumption stream. (When I was a city councillor, I sponsored a policy order to ask that water not be provided in single-serving plastic bottles at city events and meetings unless no alternative is possible. Implementation has been inconsistent so far. I also supported an order to ban single-use plastics for takeout food and drinks; it is under study by the Recycling Advisory Committee.) Power nodded slightly sheepishly, and said that, in fact, this was the first time she had felt self-conscious telling the Oval Office water bottle story.

Earlier in her talk she’d cited the wildfires in Australia as a metaphor for problems that are bigger than even the most resilient people feel they can respond to; she could hardly fail to make the connection to the climate denial inherent in continuing to carry water in a petroleum-based product that will take four centuries years to decompose. And yet change is hard even for someone like Power who teaches a course with her husband Cass Sunstein called, “Making Change When Change is Hard: the Law, Politics, and Policy of Social Change”. With climate change especially we are all in this together, and history will be made by individuals inspiring others to take action and to make change when change is hard. The next generation of young idealists can look to Power and to Greta Thunberg for inspiration. Power persuaded me that the main thing holding us back is doubting our collective power.

Next, on to kicking the habit of buying takeout coffee in a paper cup. Start by checking out Coffee Cup Collective (more on that in a future post). 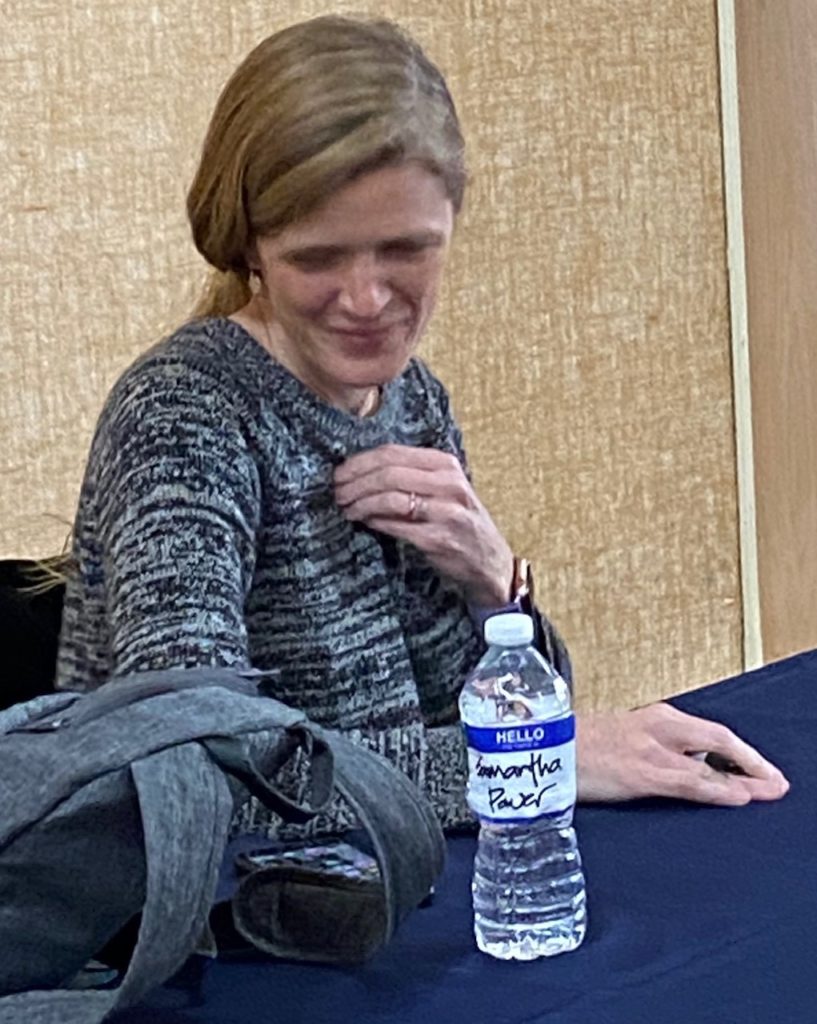 I later learned that Power herself had not brought the plastic water bottle to the event; it was provided as a well-intentioned courtesy.