In light of the discussions the City Council has had recently about reducing conflicts with urban wildlife, specifically wild turkeys, I wanted to share this article in The New York Times (“The Turkeys Not on Your Plate: They’re Out Back, Climbing the Roof,” Nov. 21, 2017).

We are not alone — by dint of what the NYT describes as “one of the most ambitious wildlife programs in the nation’s history, with more than 20,000 wild birds trapped and moved across state lines and 200,000 other birds moved to new spots within their own states in just the last 30 years or so,” wild turkeys have made a stunning comeback all over the country. Their population has grown almost five-fold since the 1970s, to 6.2 million nationally, and all states but Alaska (the state that notoriously permits people to shoot wolves from helicopters…) now offer a hunting season for wild turkeys.

Not everyone hails the wild turkeys’ resurgence as an unqualified success, however. Residents of urban areas like Cambridge, Brookline and Boston are confronted more and more often with these highly adaptable new neighbors who can be pose a nuisance and are occasionally prone to aggression. Since trapping or poisoning them is prohibited by state law, we urban dwellers must develop gentler and savvier strategies to curb the potential for human conflict and property damage. Bellicose posturing in a close encounter with a belligerent turkey may be the only instance where “hazing” is acceptable social behavior.

Stephanie Harris, Mass. State Director of the Humane Society of the U.S. and a Cambridge resident herself, spoke at a recent City Council meeting when the agenda included a memo from the city staff on urban wildlife control. I emailed Stephanie with some follow-up questions. With her permission I am sharing her response with suggestions for effective turkey management strategies and an offer for the HSUS to partner with the city’s Animal Commission:

“Here’s an HSUS factsheet that has some suggested solutions specifically for turkey conflicts plus ways to lower risk when driving on roads with turkeys, which may be helpful generally.

I’ve read a bit about the extirpation of native turkeys in Massachusetts by the mid-nineteenth century. My understanding is that in the 1970s Mass Wildlife reintroduced wild turkeys from New York in the Berkshires and that, subsequently, there have also been some shifts in other turkey populations across borders into Massachusetts. Until around the mid-nineties, I think Mass Wildlife continued to transplant birds to expand their range within the Commonwealth. Now, I think the population is up around 25,000 birds.

The movement of wild turkeys into urban areas is likely due to the birds’ ability to adapt to urban areas. Turkeys are habitat generalists and I’ve seen statistics showing that wild turkeys can be seen living in areas with as little as 15% vegetation, allowing them to use many habitat types across Massachusetts.

To address some of your specific questions:

Re competition between wild turkeys and Canada geese: I’m not aware of wild turkeys competing with geese. They don’t live in the same habitats – for example, wild turkeys prefer forests and geese live near water and in open grassy areas. Wild turkeys tend to eat fruits, nuts, seeds, and insects plus (especially in the spring) leaves and grasses. Canada geese tend to eat mostly grasses but also some insects and small fish.

Re wild turkeys scavenging in urban areas: Turkeys are omnivorous – grazing stationary plants, eating nuts and berries, and hunting insects and even small rodents. They’re also known to get into human’s trash, although bird seed on city or residential property is a bigger attractant. Another source may involve people intentionally feeding them or the turkeys finding the food people are feeding to animals outside, which can encourage them to stick around.

Re wild turkey population growth: It sounds like there may be some concern that populations of turkeys will keep growing, unchecked – that is unlikely to happen. Though, complaints in urban areas will probably remain relatively high, there were around 60 in Boston, last year. Generally, these complaints are due to residents being largely unfamiliar with how to peacefully coexist with the birds. Taking steps to haze turkeys when they are aggressive or hanging around and unwanted is the solution. The state has some helpful resources specifically for residents: http://www.mass.gov/eea/docs/dfg/dfw/wildlife/wildlife-living/living-with-turkeys.pdf

When and where there are large numbers of wild turkeys, it is the provisioning – the intentional and unintentional feeding – that occurs in communities that support those numbers. There is only so much of that provisioning occurring, and removal (or reduction) of those food sources will make it more difficult for the birds to exist, to have reproductive success, etc. in urban environments.

Since turkeys typically rely on mature forest and edge habitat to support themselves, they are only artificially supported through this provisioning in urban areas and, without it, would be unlikely to expand.

So, while it’s important to address conflicts that occur and be generally aware that wild turkeys are well established and here to say, they won’t really overrun cities and towns.

Re wild turkey aggression: Turkeys, particularly males (or toms), tend to become more aggressive during mating season (February to May). It’s possible that they may defend food sources but I’m not aware of that being common. They eat a wide variety of food, so “food shortages” may not be a likely explanation for aggression.

There are some easy steps we, as a community, can take to help prevent human-turkey conflicts, including eliminating food sources such as direct handouts from the public, unsecured garbage, bird seed, and litter (including roadside litter) and hazing turkeys.

Ideas for a city ordinance or resolution to help foster humane, comprehensive conflict management in Cambridge, include:

Re feeding:
– A prohibition on feeding wild mammals (with a possible exception for squirrels and chipmunks that includes a limitation on squirrel feeders in type and number), except on an emergency basis, because feeding habituates animals to humans, which decreases fear or normal caution around humans, unnaturally concentrates animals, and increases risk of conflict between wildlife and humans or pets.
– A prohibition on feeding birds during periods of increased human-wildlife conflict and a limitation on bird feeders in type and number.
– A limitation on feeding native and migratory songbirds because feeding should be allowed in moderation but feeding should not lead to conflicts between wildlife and humans and pets.

Re wildlife conflicts:
– Resolution of conflicts using non-lethal means, unless extraordinary and immediate circumstances pose a risk to the health, safety, or welfare of humans or pets.
– Resolution should, preferably, involve changing human practices such as improving trash management and securing stored food, modifying habitats (changing plantings or managing landscapes), and/or modifying structural elements (fencing or other methods to exclude animals).
– Removal of wildlife shall not be conducted simply because a homeowner considers the mere presence of a wild animal to be a “pest” or “nuisance” or because a homeowner wishes to favor a species or group (such as songbirds) over another that competes with it (such as squirrels).
– Approach to wildlife conflict resolution shall include the following steps: (1) The conflict is described, (2) The species involved are determined and, if possible, the individual animal is identified, (3) Methods to resolve the conflict ranging from least to most invasive and injurious are identified, (4) An action plan that ensures the least injurious and invasive effective approach is evaluated and undertaken before other measures are considered, and (5) Following final and conclusive actions, steps are taken to prevent the problem from recurring.

Re controlling wildlife populations:
– Intervention to control a local population of wild animals, in circumstances where a conflict situation has been evaluated (not merely an individual wild animal or small number of wild animals) and substantial and significant need has been demonstrated to warrant human intervention
– Alternatives to control have been undertaken before population control measures are considered, including altering human practices (such as waste handling and landscaping), and excluding or repelling animals
– Population control measures are undertaken through a wildlife management plan that carefully evaluates the best methods for controlling the specific species of concern and seeks the most humane long-term solution. Plans that require multiple control measures should also include long-term strategies to prevent the recurrence of the need for control measures. Control measures may include humane animal capture and relocation to other natural habitats on the property or as allowed by state permitting authorities; reproductive intervention (such as immunocontraception for mammals or egg addling for birds such as waterfowl); and other measures reviewed and agreed to be humane. Such control actions must be undertaken under permit by trained and qualified personnel.

Re providing habitat for wildlife:
– Provision of habitat appropriate for dooryard applications that offer cover, water, and food for wildlife is encouraged and should complement community-wide habitat management plans.
– Use of native vegetation is the first step that should be taken to attract wildlife.
– Nesting and sheltering boxes (such as bat houses, snake boxes, and toad abodes) are encouraged on private property, but should not conflict with community-wide habitat management objectives and are subject to limitations in type and number. They should be distributed in a way to avoid conflicts by harboring unintended species or attracting wildlife in numbers that are likely to cause conflict with humans or pets. They should be constructed in way that facilitates cleaning and disinfecting at least annually.
– Feeders and human-supplied water sources (including birdbaths) should be kept clean to avoid transmitting disease. They should be protected from “raiding” by mammals such as raccoons.
– Garden ponds and birdbaths are encouraged but must be maintained to prevent the proliferation of noxious insects, toxigenic blue-green algae, bacterial pathogens, or wildlife that could create conflict between wildlife and humans or pets or pose a danger to humans or pets.

The HSUS is ready and willing to assist Cambridge in developing a set of resources and policies to foster humane, comprehensive conflict management.” 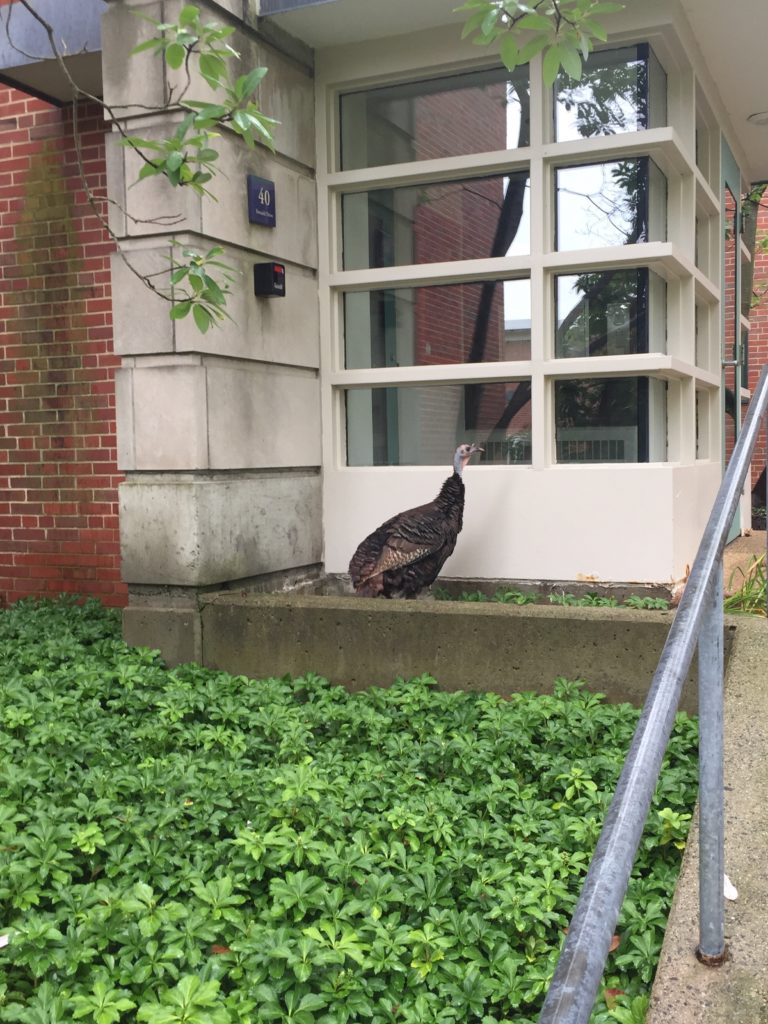 As a vegetarian, I will not be eating turkey today but my family will, and the smell of it in roasting the oven brings back many fond memories of Thanksgivings past with family and friends who are no longer with us. I wish you all a peaceful and restorative holiday weekend.