EMF building to be subject of landmark study (2 Responses)

I attended the Historical Commission’s August hearing and must say I was surprised by the outcome. (Read recap in Cambridge Day.) As undistinguished as it is architecturally, the EMF building has housed uses that have distinguished the city over the past century as a center of industry and the arts. It’s clear that many people are sad to see that history gradually erased, as factory buildings are replaced. The question is, whether landmarking such buildings is the appropriate strategy to remind us of that legacy after the prior uses are long gone. In this case the musicians have been evicted and the building stands empty, awaiting unspecified interior renovations for an eventual office use. The owner insists the building isn’t at risk of demolition, in part because it couldn’t be replaced with a building as large under the current zoning. Left unsaid is that demolition would probably trigger the requirement for extensive and expensive site and soil remediation, since a portion of the parcel was used as a gas station, and there could be heavy metals leftover from prior electro-magnetic manufacturing. Once the landmark study is complete in about a year, the Commission will discuss it and make a recommendation to the Council on whether or not to vote to landmark it. Time will tell. The debate will be instructive, and the ultimate decision could set a precedent. 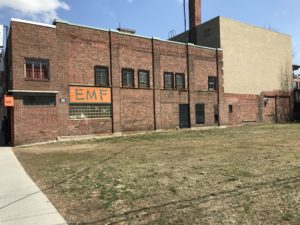