How should New Street evolve? (23 Responses)

The redevelopment of New Street was where I began my political journey several years ago, organizing a neighborhood response to a 93-unit development proposed to replace the former JC Adams Windows warehouse (pictured below). This is what the north side of New St. looked like in late 2014: 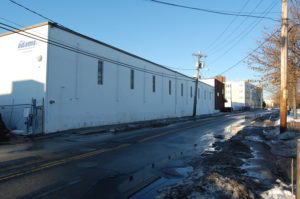 A lot has changed and much has improved since then, and greater public engagement has contributed to elevating the conversation about the continued evolution of this formerly industrial area. Following extensive community input, the new housing was approved in 2014 with design changes that will result in a more attractive and walkable street-front. Construction is underway following many months of site prep and soil remediation. (All the other parcels on New Street will need extensive site remediation to overcome the area’s industrial and town dump legacy.) I look forward to the project’s completion within the next year or so, as I’m sure the tenants in apartment building next door do as well.

As a result of the neighborhood leadership I demonstrated before I was elected, New Street itself was redesigned and reconstructed with new, ADA accessible sidewalks, narrower travel lanes, painted bike lanes, buried power lines, and room for street trees. Our demands to improve non-auto connections spurred the City to finally purchase the long abandoned railroad right-of-way directly behind the New Street housing. It will become a multi-use path connecting Danehy Park with the regional trail network.

And most important, community engagement made the Alewife area the focus of the first phase of a citywide planning study (Envision Cambridge). That portion of the study (Envision Alewife) is nearly complete and it envisions the continued transformation of New Street into a vibrant and walkable residential and mixed use area. See the image on page 26 of this presentation showing the desired land uses and open space connectivity plan for the “shopping center area” that includes New Street. (The area that is the subject of the Pizzutto petition discussed below is shown with two yellow buildings indicating future housing.) Zoning recommendations to help achieve these goals in future developments are expected to be proposed for discussion in early 2019. The long unrealized potential for a new neighborhood to emerge along New Street connecting Danehy Park and Fresh Pond is at hand.

So it seems especially ill-timed and misguided to petition for a zoning change that would take New Street a step backward. The Pizzuto petition would use a valuable site abutting to Danehy Park to build a 4-story self-storage facility, covering virtually the entire lot and having minimal setbacks. But that is what we have before us in the zoning petition to be considered in hearings this month. Briefly, this petition identifies two sites on the south side of New Street, only one of which is actually owned by the petitioner, and asks to double the density (to 3.0 FAR) to enable a “commercially viable” self-storage use. See petition text. The CDD staff memo poses several questions about this rezoning proposal in the context of the area’s broader planning goals.

The petitioner owns only the lot known as 52 New Street, the Pizzuto family’s former produce and grocery warehouse that became the Evolve fitness center about a decade ago. The site next door at 22-48 New Street is home to S+H Construction and several small businesses. It seems to have been included in the petition to prevent it being labeled “spot zoning,” but that property owner, who also owns 47-51 New Street across the street, did not sign the petition. Other property owners on New Street and abutters to the rear on Bay State Road may not not on board either. In fact, this petition appears to have a only one strong supporter — the developer who submitted it on behalf of the Pizzutos.

Many people would like to save the gym, and the gym would like to stay, but the property owner has the right to sell the site. No one disputes that fact. While the warehouse’s current use as a gym is highly valued by many in the community, Evolve is a tenant, and commercial tenants that are not paying top dollar are just as vulnerable to displacement in a city with rising land values as residential tenants are. But we have no equivalent of inclusionary zoning or linkage fees to help protect non-residential tenants from displacement. The parallel to the musicians recently evicted following the sale of the EMF building near Central Square is hard to ignore; in each instance a former warehouse was repurposed to meet a vital community need, whether music or fitness, but within a decade the land became too valuable for that to remain the “highest and best” use. [The EMF building will be studied for its potential as to designated a landmark based on its cultural significance. Read more.] What the community values — uses that build community, whether by promoting health and wellness or fostering artistic expression — the speculative real estate investor market typically does not prize as highly (or at all?). The two key words in the petition text are “commercially viable.” In perfect hindsight the City might have had the vision to acquire or at least option a site on New Street when the dump was first converted to a park in the late 1980s and the land was cheap and reserved it to create an indoor recreation and community center.

Still, even in today’s overheated market, there is no imperative or overriding public benefit that justifies rezoning this 44,000 sf parcel to redevelop it more profitably as a self-storage warehouse than as something else that supports human activity and enhances place-making and a sense of neighborhood. The Evolve site could become the housing shown in the Envision plan, conceivably even a new building with a fitness center on the ground floor. Or it could become offices for a local company seeking to expand and priced out of Kendall Square. If it became housing it would be built with the required 20% affordable and more 3BR units, another positive change since the last housing on New Street was approved a few years ago.

With the majority of neighboring property owners and residents lined up in opposition, this zoning petition should be a non-starter. Yet by framing it as a “low-impact” and “environmentally friendly” use, the developer has found support among some prominent environmental organizations who do not appear to be following our land use planning very closely. Zoning changes are already under consideration for this flood-prone area that are expected to raise the bar for climate change resiliency, making the benefits this developer suggests might be part of an eventual storage building seem less exceptional. From an urban form standpoint, a storage building would not be “low-impact” since it would cover the entire lot with a featureless box 45-feet tall. A big box (possibly almost 130K s.f.) containing smaller boxes of belongings people may regret paying monthly not to use. (Let’s pause to re-watch The Story of Stuff before touting the environmental benefits of a storage facility.) Storage units don’t need windows, so there would be long blank walls or walls with fake windows. The project can be pitched as highly energy efficient, possibly even Net Zero, because it will have next-to-zero human activity inside most of the time. The demand for storage is seasonal, and it peaks in the summer when college students need a place to stash their dorm furniture and books. There is already a family-owned self-storage facility nearby on Concord Ave that offers storage for homeless and low-income people and youth sports teams, has a large solar array on its roof that sends power back to he grid, and is not full year-round. By contrast my understanding is that this developer is working with the country’s second largest operator of storage companies.

My rant is over. It should be clear where I stand on this. We can do better. Let’s at least try.

There are public hearings on this petition on Thursday 8/16 (3:30pm at City Hall) and Tuesday, 8/21 (6:30pm at the Planning Board). Both will be live-streamed and recorded on the City’s Open Meeting Portal. NOTE: The petitioner requested a continuance of the Planning Board meeting to allow time to revise their plan. The Board will have to vote on whether to allow it.

The images below are rough renderings of the type and scale of building that could be built on the Evolve site, if the zoning change is approved. The topic of the hearings is the request to change the zoning, not to review a design proposal. But knowing why the zoning change is even on the table is important: it would enable a “commercially viable” self-storage building like this directly abutting Danehy Park. Note the very minimal setbacks on all four sides of the lot. The lot line on the Danehy side includes a steep hill and the methane trench to vent the landfill that Danehy is built on top of. 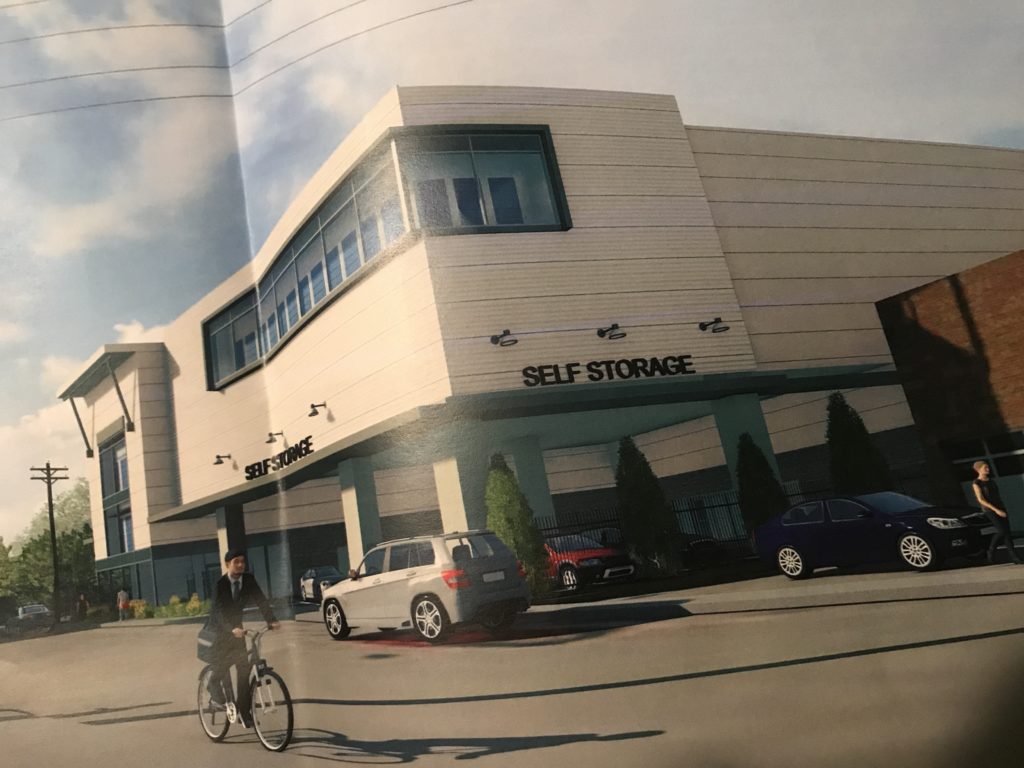 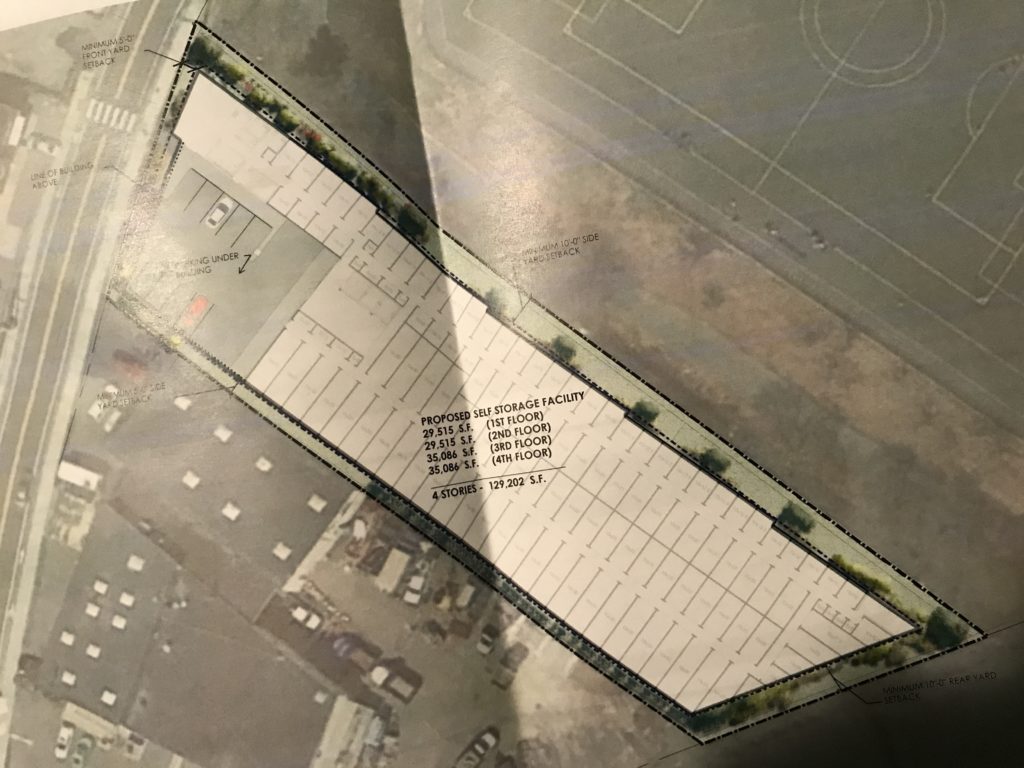